How did we get two coveted pet spots on the rotator (AMC flight)?

1) We PCS-ed in October.
2) My husband keeps a ton of leave reserved for times like this. We told them we’d prefer to leave at the beginning of October, but he had enough leave to fly anytime in the month and still have leave left over.
3) Luck. The schedule seemed to open up early for some bases because I saw posts on Facebook about people securing their spots on our target travel date. Cass went into TMO and got our second date since the first one had already booked up.

The reason we wanted the AMC flight and sacrificed some of my husband’s precious leave was because I had already stressed out enough doing their FAVN and setting up everything for the health certificates. I didn’t want the added pressure of having to fly commercial with the advanced notice, transfers, and all that goes along with international travel.

Like I said in my A Guide to PCS-ing with Dogs to Japan: First Steps post, I was living in Portland while Cass was doing a short tour in South Korea. When his tour was up, he came to me in Portland to spend a few weeks with friends and family; then we left from there.

The first step of our trip was to drive up to JBLM in Tacoma, Washington for the dogs’ health certificates. It’s SO much easier to use this office than any others because they process health certificates for international travel on a regular basis. They have the process down and at the end of our visit they neatly bundled all the necessary travel documents, as well as copies, and put all of them into manila envelopes for us.

We had a day and a half in SeaTac so we booked a room at La Quinta. The chain is super dog friendly with no pet fee so we always stay with them if we can when we travel with Lexi & Gambit. The staff at the SeaTac La Quinta LOVE dogs and if they weren’t busy, they’d come say hi and give them treats. There are some great parks to explore in the area too if you have a car and want to take your dogs out. 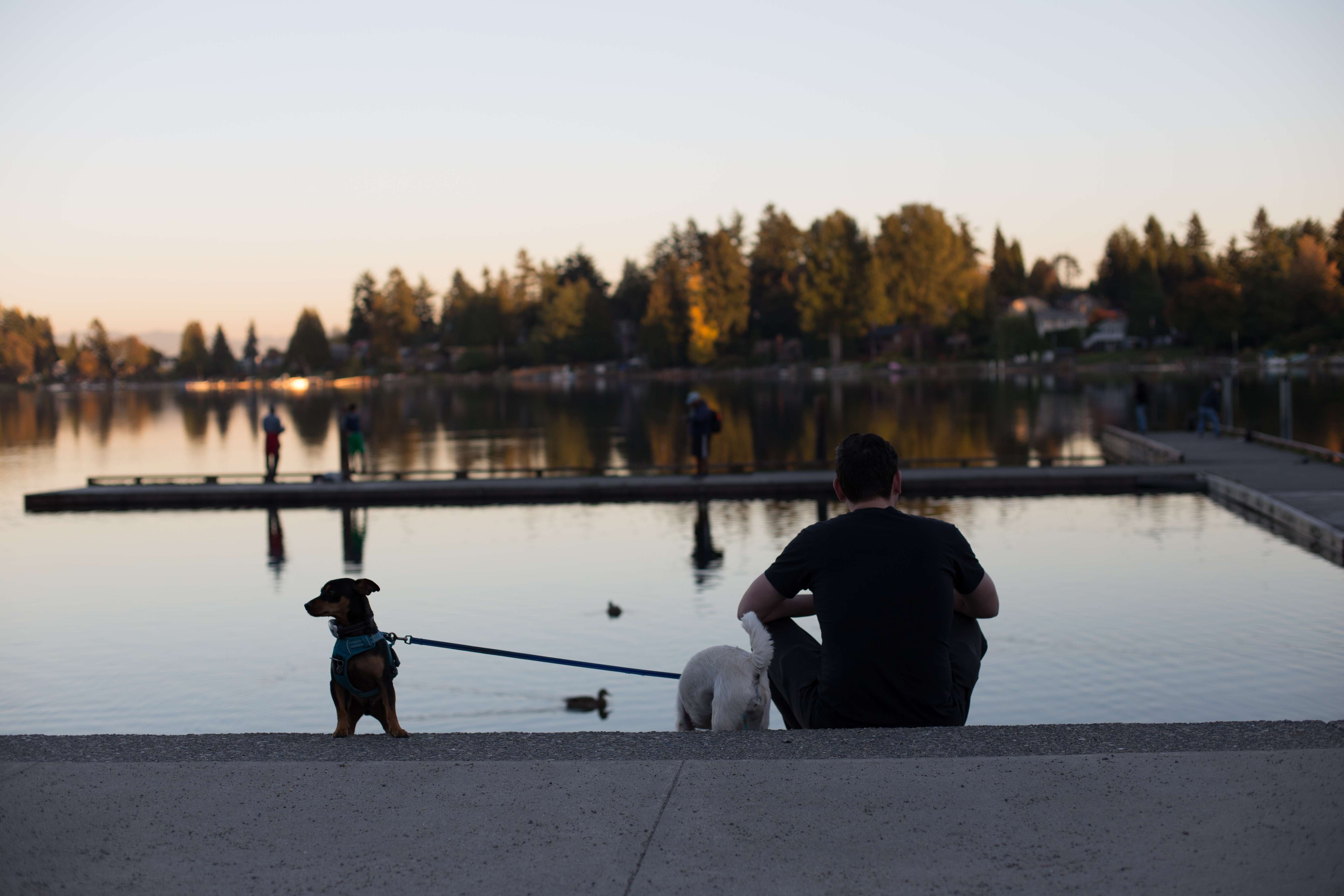 Angle Lake Park in SeaTac, Washington. A nice park just a short drive down the street from our hotel. 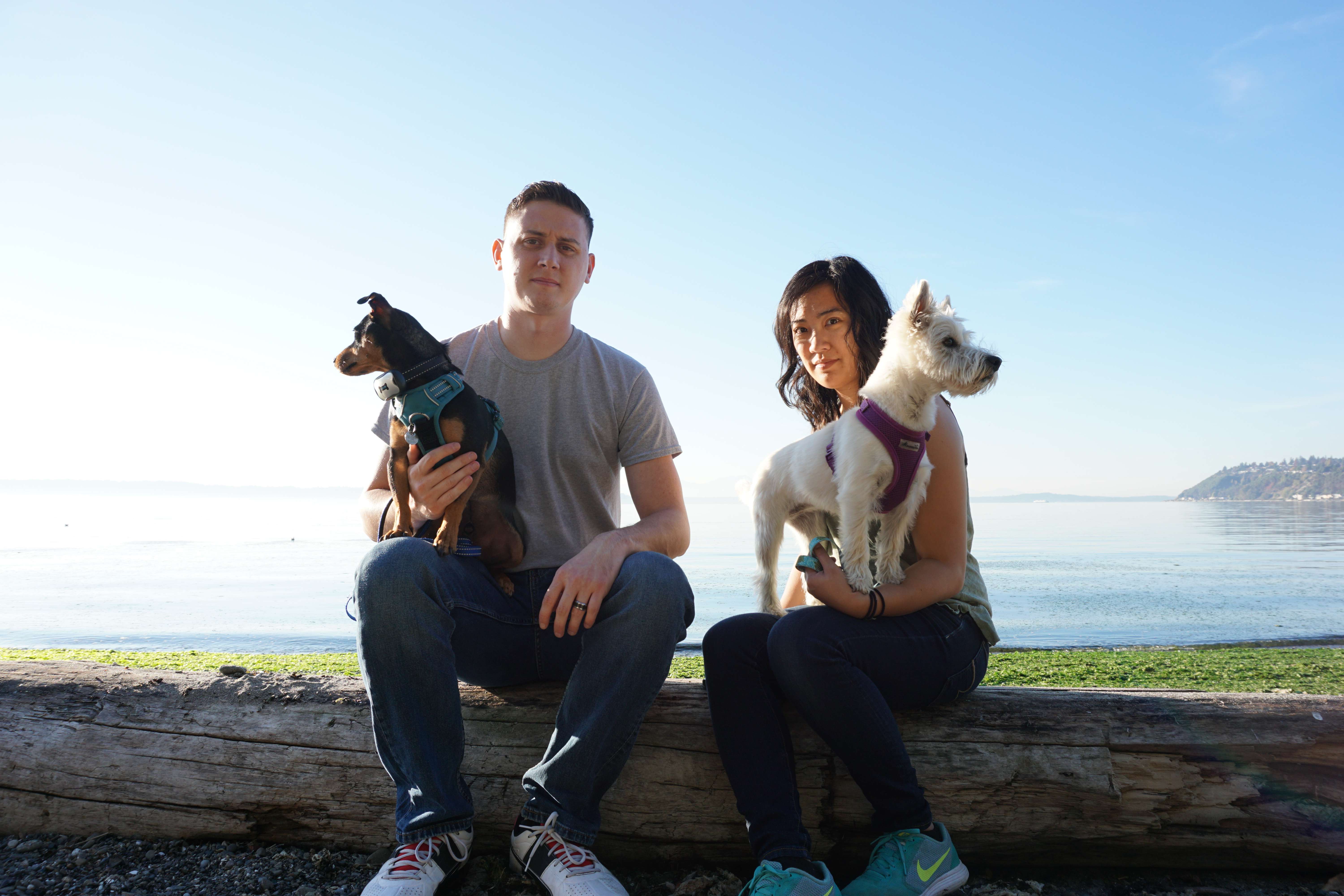 Seahurst Park in Burien, Washington. Lots of trails, beach access, and so pretty!

If you’re facing the building and the check-in desks, the AMC desk is all the way on the left. Just keep going to the very end. The USO is awesome and there are stairs behind the check-in area as well as at the center of the building.

If you’re traveling with pets and/or children, there is a separate family line. So you don’t have to get in line at midnight. Cass dropped me and the dogs off at the curb while he returned our rental car. By the time he got back the check-in desk had opened up so we hopped into line and it moved along fairly quickly.

I did hear from some people that they arrived at 5 and AMC had already given away their pet spots. So even though you don’t need to get there super early, it’s better to be safe and be in line when the desk opens.

After check-in, we left their crates upstairs and took the dogs to walk around outside. We walked up and down the sidewalk outside the baggage claim to make sure they took care of business. There are dog relief areas on either end of the terminal, but the one at the far end is next to a big smoker’s area so we didn’t linger on that side. After the dogs got their jitters out, we found a quiet area with some benches and rested until it was time to go.

We were the last people to leave our dogs. I think everyone else had kids so they had to worry about getting them through security and set up. It’s just us and we’re seasoned travelers so we could spare the time to spend with our dogs until they were loaded up.

A tip to set up your pets’ crate:

Tape down a pee pad, then tape down a blanket or towel over it. That way if the dogs start scrambling around when their crates are picked up, they don’t shred their pee pads and everything doesn’t end up in a ball in the back of the crate. If you forgot to bring tape (like we did), the check-in desk had a roll of packing tape they let us use. They also had zip ties for the doors.

We only saw our dogs once during our journey for about 15 minutes. We deplaned and eventually someone made an announcement for pet owners. Just wait by the doors and they’ll gather everyone together to be escorted out onto flightline. They cut off everyone’s zip ties and there was a small fenced grassy area for the dogs to relieve themselves. No one took their dogs off leash because it would have been chaos.

We had a carry-on dedicated to the dogs. It made it easy to whip everything out as we needed them. They had no interest in eating, but they drank the water and took a couple treats. Lexi had soiled her crate, Gambit’s was clean. Cass used our wipes to give the crate a quick wipe down and tossed the dirty towel. We replaced it with a clean one and a clean pee pad. Since we forgot the tape Cass tried his best to reuse the tape we had gotten at SeaTac, but it was trashed. By the time we got to Okinawa, everything was a jumbled ball in the back of her crate.

Our escorts had zip ties to re-secure everyone’s crates again. The worst part about this layover was that the dogs were kept in the next room and we could hear all the dogs barking and crying. They kept that room locked, but there’s a big window between the two rooms and there’s a big opening with a grated gate (like the ones they have at the mall) in the hallway that leads to the bathrooms. So we could practically see the dogs, but we couldn’t be with them.

What was in our dog bag:

A water bowl, a reusable water bottle that we filled after security, extra zip ties, two replacement towels, two pee pads, a bag of treats, a small bag of food (they didn’t touch it), and dog wipes (in case they pooped on themselves and also to clean the crate if they used the pee pad). What I wish were in there: a roll of tape to retape the pee pad and towel.

It was a ridiculously long journey and the dogs were so amped up when they saw us at baggage claim. We had their bark collars on us, but at first we were told not to open their crates until after we left the secure area. I think Lexi’s annoying unrelenting shrill barks made a point and they let us cut the zip ties to put on the collars.

A sweet USO volunteer filled the water bowls attached to the crate doors when they were unloaded, but the dogs trampled the bowls in excitement when they saw us and made a huge mess. If you want to give your dogs a water container, get one of those rabbit style ones so they can’t splash it everywhere.

While we waited for our baggage we filled out some paperwork with the vet workers, they checked our travel paperwork, and we got instructions for registering them on base within 72 hours. After getting our baggage, everyone had to go through a customs check.

Then the Okinawa adventure began! 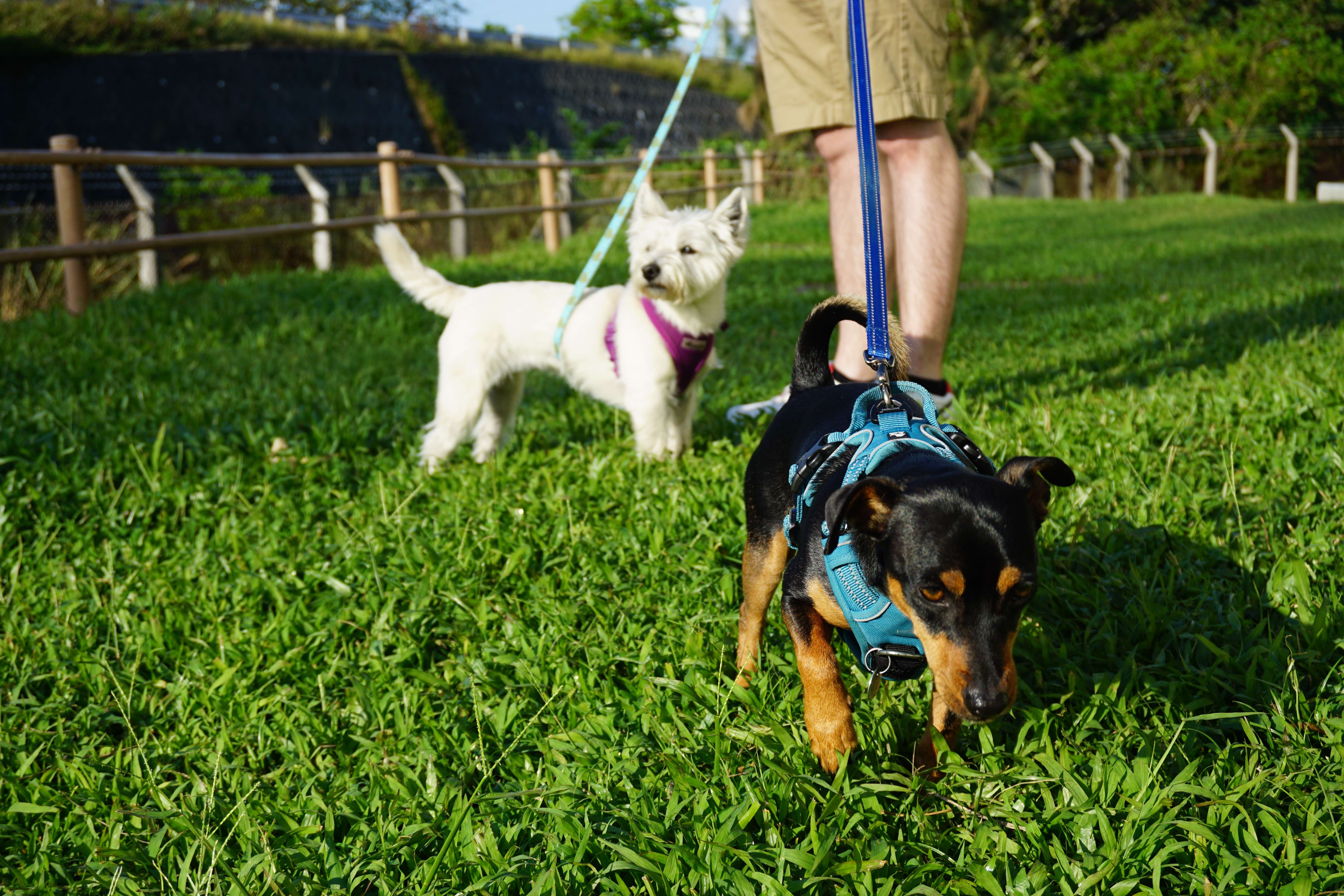 If you have any questions, I’ll do my best to answer them or steer you toward the right direction.

If you just got an assignment to Okinawa and don’t know where to start, part 1 of my guide might be helpful for you:

1 thought on “A Guide to PCS-ing with Dogs to Japan: Flying on the Rotator”